The seaside promenade of Palma. Genesis, development and future

On Friday the 20th January, took place the ceremony of the Ciutat de Palma Prizes awarded by the city council of Palma. I have been awarded with a research grant for my project The seaside promenade of Palma. Genesis, development and future.

It consists on a study of the urbanisation and the buildings of the seaside promenade of Palma (Mallorca), comprising the area between Portopí and el Molinar. The aim of the project is to historically establish the phases of the creation of the promenade, to point out and analyse the most important buildings and to determine the relevance of the promenade from a two point perspective, so to say, considering its relevancy in terms of urban planning of the town and its usefulness for locals and visitors.

The Mediterranean Sea has been a key element for the evolution of the city, from romans to 19th–century travellers up to mass-tourism boom in the 1960s. The most important change of the seaside façade of Palma was the creation of its promenade. All started in 1939 with a contest and from then on, it grew during decades from the west to the east reclaiming land from the sea. At the same time, brand new buildings have been constructed. They coexist with ancient religious and military buildings and, at the same time, representing the arrival of architectural modernity. Apart from this significance for construction and as most as seaside promenades, the one of Palma plays a main role in the image of the city.

Given the relevance of Palma in worldwide tourist routes, it is important to do research on one of its main avenues from a global perspective taking into account both history and architecture. In addition, the knowing of this infrastructure and its equipment can be helpful to decide the future of the promenade and which are the most suitable options to adapt it to 21st–century social, environmental and economic challenges.
Written by María Sebastián en 1/17/2017 No comments:

Rul·lan and the hotel Bahía Palace in Palma. The diffusion channels of tourist architecture photography


During the earlier days of November, the Museum of the University of Navarra held the International Conference Inter=Photography and Architecture that reunited architects, artists and researchers.

My paper "Rul·lan and the hotel Bahía Palace of Palma. The diffusion channels of tourist architecture photography" was accepted for its publication in the proceedings book. In it, I analyse the series of photographs shot by Estudio Rul·lan (1918-1980) at the hotel Bahía Palace in the seaside promenade of Palma -preserved at the Arxiu del So i de la Imatge de Mallorca- and how they were spread through press and publicity.

The paper is included in the second volume of the proceedings (p.202-211) and can be read and downloaded in this link: Inter=photo arch. Interferences. 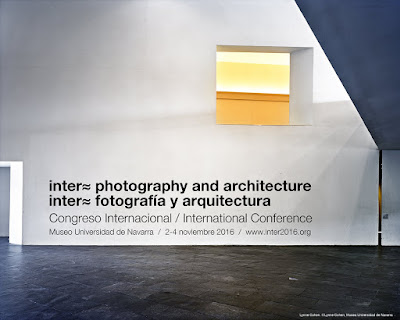 
Next Tuesday, the 31st of May, we will present the catalogue Xisco Bonnín. The (in)visibles cities. It reflects the exhibition that was shown during last summer in the Casal Solleric of Palma.


The event will take place in the XXIV Fira del Llibre, installed on the Passeig del Born of Palma. The artist, Xisco Bonnín, as well as Francisca Niell, Fernando Gómez de la Cuesta and María Sebastián will participate in it. 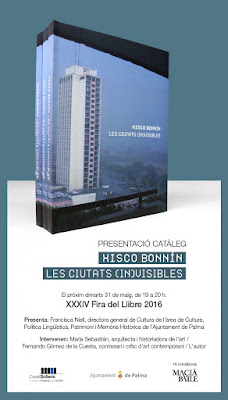 Made in Balears. International Photographers in the Islands

After visiting Barcelona and Paris, the exhibition Made in Balears. International Photographers in the Islands has arrived to the Castle of Bellver. The exhibition compiles photographs taken in the Balearics between the decades of 1910 and 1970 by artists coming from different countries and is the result of the I+D research project “La construcción de una imagen turística a través de la fotografía. El caso de Las Baleares (1930-1965)” (HAR2010-21691) lead by Maria-Josep Mulet.
﻿﻿

Email ThisBlogThis!Share to TwitterShare to FacebookShare to Pinterest
This is about: Exhibition, History of Photography, Palma, UIB
Ubicación: Bellver, Palma, Illes Balears, España

The Universidad Pública de Navarra has been the place chosen for celebrating the IVJornadas Doctorales organized by the Grupo 9 de Universidades. Each one of the universities of the group selected two PhD students from the fields of Arts and Humanities, Sciences, Health Sciences, Social and Legal Sciences and Architecture and Engineering.

Email ThisBlogThis!Share to TwitterShare to FacebookShare to Pinterest
This is about: History of architecture, History of Photography, Pamplona, Poster
Ubicación: Pamplona, Navarra, España

Tourism in the Balearic and Pityusic Islands. A brief graphic history

Exhibition, Faculty of Tourism, University of the Balearic Islands, Palma. From 30th October 2015 to 11th January 2016.

The members of the Photographic Observatory of the Landscape of the Balearic Islands, a project that comes from the research group Audiovisual Heritage, Mass-media and illustration, have curated and prepared the exhibition Tourism in the Balearic and Pityusic Islands. A brief graphic history. 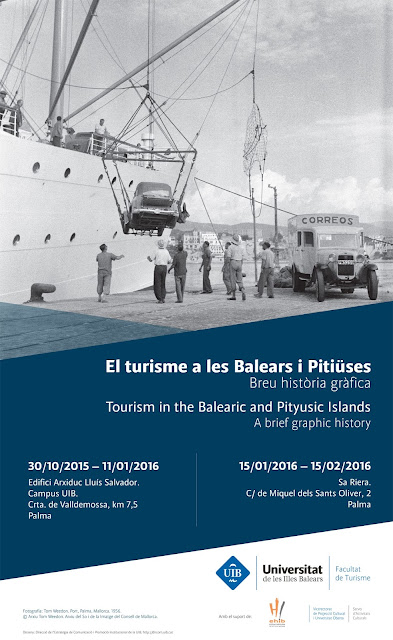 Do you need an architect?

This work by María Sebastián is licensed under a Creative Commons Attribution-NonCommercial-NoDerivs 3.0 Unported License.